Hearings slated to decide if other officers can volunteer

Genoa, April 30 – Three policemen found guilty by Italy’s highest appeals court in 2012 of grievous misconduct for beatings at the 2001 G8 summit in Genoa have been assigned social-service duties by a tribunal in the northern Italian port city. Massimo Mazzoni, Renzo Cerchi and Davide Di Novi will carry out volunteer work in Liguria and in Rome. Another hearing slated for December 5 will decide if other convicted officers will also be assigned to volunteer social work. The July 2012 ruling effectively truncated a significant part of the top tier of Italy’s national law enforcement with its sentence for grievous misconduct. In addition, the Italian Cassation Court the same month upheld criminal convictions of three police heads and two former high-ranking officers for aggravated perjury regarding cover-ups of police beatings during a raid at the Diaz school, used by anti-globalist protesters as sleeping quarters during the 2001 summit. 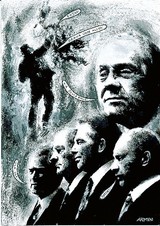 In the nightly raid, over 300 police officers attacked activists and journalists, seriously injuring 93 and putting another three in a coma. Amnesty International called the event “the most serious suspension of democratic rights in a Western country since the Second World War”.