STRASBOURG, France (Reuters) - The European Court of Human Rights condemned Italy on Tuesday for failing to carry out a thorough investigation into the death of a protestor who was shot by police at a G8 summit in Genoa in 2001.

The court awarded 40,000 euros ($57,160) compensation to the protestor's family. But it decided unanimously that the police officer had not used disproportionate force when he fired during an attack by demonstrators on his vehicle. 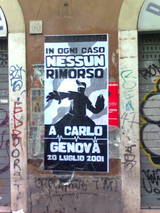 The Genoa Group of Eight has gone down as one of the most violent summits of the club of rich nations, which frequently faces protests by anti-globalization groups.

As well as the death of the Italian, Carlo Giuliani, more than 231 protestors, many visiting from other countries, were injured and over 280 arrested. Many complained of police brutality.

In November 2008 an Italian court found 13 police officers guilty of beating protesters at the summit, but acquitted 16 others, including the most senior police officials.

The European Court, which looked into the incident at the request of Giuliani's family, found that the Italian official investigating his death had allowed his body to be cremated before a proper analysis and that the investigation was too narrow.

"Italy had therefore not complied with its procedural obligations in connection with the death," it said.

The European court also looked into whether planning for the meeting had minimized the risk of lethal force being used. "There were a number of shortcomings in the organization of the operation," the court said.