Japan’s defence ministry is considering the possibility of deploying
Patriot-3 missiles around the venue where the next summit meet of the
Group of Eight (G8) most industrialised countries are to be held, media
reports said Wednesday.

The missiles could be deployed at bases of the Self-Defence Forces (SDF)
around the summit site located beside the Toya Lake of northern Japan’s
Hokkaido prefecture, the Industrial and Economic News daily reported. 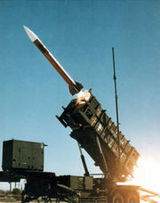 The ministry is also planning to deploy frigates and missile-equipped
boats in the nearby bay and Aegis destroyers in the Sea of Japan and the
Pacific Ocean, the newspaper said, adding that airborne warning planes and
chemical defence troops may also be sent to Hokkaido.

The defence ministry and the SDF have been assigned by the Japanese
government’s anti-terror and security mission to take care of the security
arrangement for the G8 summit slated for July 2008.