Genova, 26 Oct.- A consolidated compensation amount of 2.6 million euros, including 2.5 million euros for damages not related to cultural heritage: this is the request forwarded by the government, which covers the civil case against 25 demonstrators accused of devastation and looting in the context of the trial over the street violence that took place during the G8 summit of 2001 in Genoa. As regards damage to the image, the lawyer for the State Ernesto De Napoli has asked for 2.5 million euros, amounting to EUR100,000 for each anti-globalization demonstrator. In the case of cancellation of the charges of devastation and looting while pursuing those for resistance and violence against public official, De Napoli has asked for EUR30,000 as compensation from each demonstrator. 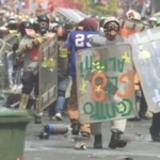 Other than damages not related to cultural heritage, the advocate for the state has also demanded compensation of EUR115,000 (from between EUR1,000 and 83,000 depending on the accusation) for damages to property belonging to Public Administration. The most significant figure of EUR83,000 has been put forward in the cases against Marina Cugnaschi, Vincenzo Vecchi and Alberto Funaro, singled out to compensate in full for damages inflicted on Marassi prison and other structures.