I am just back from a trip to Korea and Japan. No! G8 Action Japan,
and two members of the info-tour
group from Germany, and I went to Seoul and Tokyo, where we gave
presentations in universities and activist spaces and had meetings with
various types of activists. Subsequently, the rest of the group extended
their itinerary to Hokkaido, Osaka, Kyoto, and Yokohama, before
returning to Tokyo to conclude the tour in Japan. Then one went back to
Europe, while the other and one person from No! G8 Action departed for
South East Asia. The information on the tours is
on this website:
http://gipfelsoli.org/Home/Hokkaido_2008.

By touring with the European activists closely, we Japanese learned
their experiences in Europe. And both sides were able to collaboratively
act upon organizing people in different places, with the perspectives of
past and future. 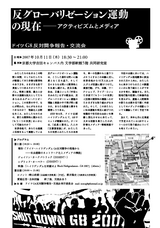 Meanwhile the European activists were conducting their
own project to film-document the movements of the East Asia that have
been little exposed in the West. So the tour consisted of mutual
learning processes.

The trip to Seoul was largely supported by The Research Machine
Suyu+Nomo, a unique independent research and living community, where we
had close exchanges with the members. We gave a presentation and had
discussion at Galmuri Press (aka. Multitude Network Center), a radical
press and study center. We also met with representatives of Migrants
Trade Union and Migrant Worker television as well as anarchists of
different generations — from eighty-five to in their twenties.

In Tokyo we organized presentations in various environments, both
activist and academic, where the European activists encountered
independent media group, NGOs, radical left activists, and even the
chairwoman of the Social Democratic Party. But the focus was the close
communication with the members of No! G8 Action, who are in the midst of
preparations for the next G8 protest.

According to one Japanese activist, who organized and led the tour
to Hokkaido, they met with local anti-G8 activists and examined what the
G8 meant in the historical context, beyond the stereotype of ³using the
G8 as a chance to protest.² They also visited the site at Lake Toya,
including the hotel where the representatives will stay. There they were
constantly dogged by the Japanese security police, but also interviewed
by the newspapers as well as a local TV:
http://video.google.com/videoplay?docid=-9054383508293905769&pr=goog-sl

In Kyoto, where there will be a G8-related conference hosted by the
Ministry of Foreign Affairs and a large protest is planned, they had a
presentation at Kyoto University which led to a long discussion with the
students and activists. In Osaka they met with the support group of
homeless people and participated in their festival.

The last part of the tour is currently underway in Taipei, various
cities in the Philippines, and Hong Kong. At this very moment they are
somewhere in the Philippines and having exchanges with innumerable
groups. The report is forthcoming.

The members of No! G8 Action in Japan are trying to organize
multi-layered coalitions, from large to small, from moderate to radical,
including various organizations, working groups, and professionals.
Their most crucial effort at this moment is to establish close ties with
local groups in order to establish roots in Hokkaido. Their objective is
to form a radical mass movement against the G8 locally and globally, at
the same time as realizing good reception conditions for the foreign
participants. They are still facing various issues. There are many
unknown factors. But they are struggling to achieve the best possible goals.

Thematically they are trying to place the next year¹s event in the
historical and geographical contexts: for instance, connecting it with
the themes of the past G8 protests (especially those taken up in the
Okinawa G8 in 2000 related to the people¹s lives affected by the US
military base), the problematics of JPEPA (Japan-Philippines Economic
Partnership Agreement), and the local issues in Hokkaido such as those
being faced by the farmers and the indigenous Ainu people.

Our future plans for the info-tour are as follows: In New York, on
the 31st of October, two Japanese activists will give a talk at the New
Space: , focusing on the issues around the
coalition building for a radical mass movement in today¹s Japan. On the
6th of November, at Blue Stockings: , we
will give a presentation to invite New York Activists to Lake Toya. On
the 7th, we are planning to give a party for those who are in New York
area and wondering about the possibility to come to Japan or just
interested in hanging out with us. Thereafter two of us will travel to
Montreal and Toronto to have exchanges with the activists there.

In December someone from No! G8 Action Japan will embark on a trip
to some countries in Europe. In 2008, we will be continuing our
itinerary to places we have not seen in Asia, Europe, and North America.
Your suggestions and invitations are much appreciated.

One last thing: we are also planning an international conference to
discuss the past and future of the Global Justice Movement, tentatively
called ³Anti-G8 Forum,² inviting intellectuals and activists from
different corners of the world. For this project, several intellectuals
representing different universities met in Tokyo to form a committee.
This is supposed to reinforce the entire anti-G8 project on the
strategic level. We shall report on this project as well.

For your interest, following are images from the past protest scenes
that have taken place in Japan. These might give you a glimpse of the
street actions Japanese-style.

Global Outreach of No! G8 Action