Review of BLACK SUN OVER GENOA

This will pleasantly surprise anyone who is used to cringing his or her way through political community theatre. From the beginning it is clear that it has been meticulously researched. The costumes, dialogue and political attitudes are very accurate and clearly sourced from Indymedia and many of the DIY films made about the events of Genoa 2001. The only obvious thing is that the entire Black Bloc, Pink & Silver, GR/Red Block and Tute Bianci seem to come from Scotland. As all the actors are locals and volunteers this is entirely forgivable especially as they give a very good account of themselves. The bloke playing the ‘WOMBLE’ character was particularly good. 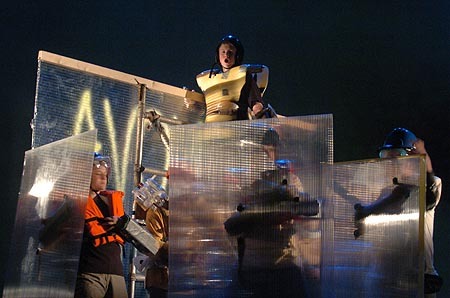 The main action of the play is centered on the Diaz school and the debates going on within its walls between the different kinds of activist that went to Genoa. No doubt our movement’s self-appointed critics will pick holes in this but that’s nothing new. The people who were actually in Genoa seldom agree on what happened. The point is that compared to much of the shite that appears in mainstream political theatre and TV this is a refreshingly accurate representation. It also refuses to come down on any political viewpoint from any of the groups involved. The arguments are given equal an airing and no conclusions are drawn.

Limited by time (the performance is just over two hours with a break) there are many groups who don’t get covered. The viewpoint is therefore from foreign activists visiting Genoa rather than the Italian organizations like COBAS for example. This is again forgivable and necessary to make the narrative accessible to folks from this side of the water.

It also has to be said that the production is visually stunning. The lighting (I used to be a lampy) is superb and the cast and crew really do make the most of the space using the minimal sets to their full potential and the rest of the theatre as well at one point. Much of the action is visualized by projecting real footage from Genoa onto a back screen and giant drapes by the side. The footage pulls no punches and the true horror of the Police violence in Genoa is there for all to see. From my own point of view this made me feel almost physically sick as it brought back many painful memories of what was a very traumatic time. However feelings of nausea are quickly replaced by intense anger and it is entirely appropriate that the brutality is shown in more detail than the mainstream media would dare. Most theatre goers are after all more likely to be middle class, white collar types who would benefit greatly from seeing the murderous nature of the system they benefit from.

In conclusion I can recommend this highly to anyone who didn’t go to Genoa and wants to know more. If you were there then watch with an open mind, this is so much better than other attempts to dramatize this movement.

As far as I know the Theatre is offering a reduced rate of £5.00 per ticket to anyone who is in Edinburgh for the demos. It then moves to Glasgow. Phone the Festival Theatre for details.