Concerning Genoa we speak of 5 main criminal court cases and tens of civil suit for illegal arrests, abuses and so on. We will detail here only the main criminal court situations.
We have 2 court cases against protestors and 3 court cases against police.
The first court case against protestors is the so-called "Processo al Sud Ribelle" held in Cosenza (and not in Genoa Courtroom as the others): here 13 activists (some of them very well known like Francesco Caruso, now MP, and Luca Casarini) are charged of "criminal association aimed at subversing the state and its economic statute" (the translation of the charge is not literal). This courtcase is something of a big show setup by Carabinieri and prosecutor striving for fame and glory, but it implies heavy conviction for people involved. The case has a slower pace than the other court case, but should come to an end within the 2008.

The second court case against protestors is the so-called "Trial against the 25": here 25 activists from various political areas are being charged for "devastation and looting", a crime coming from post-WWII legislation and referring to looting happening after bombing and similar situation. The crime implies 8-15 years of jail as conviction and the prosecutor's theme accuses 25 activists of being guilty since they not only participated but agreed with what happened in genoa: it's called psychic comparticipation of the facts and it's the stronger issue to charge them with "devastation and looting" instead of simply charging each one with the "criminal activities" that can be connected personally to them. The use of "collective responsibility" charges is what has been new of this court case (the same charge after Genoa court case started has been used in all other courtcases involving some form of rioting from milan to turin). And its this element that constitutes politically the most dangerous statement.

After a long stop during the fall-winter season of 2006-2007, the "Trial against the 25" is bound towards its last witnesses this week (last week of june 2007): after the conclusion of the prosecutor witnesses the defense lawyers have been calling on politicians, journalists, and intellectuals to better clarify the court what Genoa was about and how it all developed. The last witness for the defense this week are fairly important: a social science expert of police self-perception and tactics came to better explain why police messed it all up in genoa, and one of the lawyers' consultant will come to present the results of the video counter-investigation on public order management done in all these years. The idea is to clear out to the Court that the responsibility for the riots and public orders problems in Genoa was on the Police side (and the Government's).
During the summer "pause" lawyers and prosecutors will prepare their speech, and in september-october 2007 the court case will come to a first sentence.

And now the court cases against the police.

The first court case against police is the so-called "Perugini Trial": six officers of the "DIGOS" department (the police section due to investigate and check political situations) are charged with "injuries", "false declarations" and "libel". Perugini, Raschellà, Mantovani, Pinzone, Del Giacco and De Rosa (these are their names) took part into the arrest and beating of a group of youngsters and journalis who during saturday 21st afternoon were doing a peaceful and taunting sit-in on a road just on the side of the main demo. Furthermore these officers stated in their arrest warrant that the youngsters resisted arrest violently. Unfortunately for them the scene has been filmed by 2 or 3 different national televisions: it's the one where we see this young kid (less than 16 at the time) arrested violently for no evident reasons and kicked, with it's eye bone sprouting some centimeters out of his face.
The case has a slower pace than the others (one hearing each 2-3 months) and is coming to an end: the victims of the beating came to witness, as well as journalists and video makers. The images were shown in the courtroom making it clear to the judge how things actually happened. One of the officers (De Rosa, from Milan DIGOS) chose the short proceeding for the trial and was convicted to 20 months of jail (suspendend on probation), while the others tried to justify their actions during the hearing of may 31st, 2007: they tried to convince the court that they were really afraid that those 10 youngsters were trying to assault the police central department and were to be stopped. Nobody in the whole tribunal could really believe what they were talking about. The next hearings are bound to happen in october 2007 and probably around november-december 2007 we will have the sentence of this court case.

The second court case against the police is the so-called "Bolzaneto Trial": 45 people (police officers, carabinieri, penitentiary police officers, medics and paramedics) are charged of various crimes ranging from "false declarations" to "abuse of one's official duties" to "injuries". Italy is missing the charge of "torture" notwithstanding the EU decision on the issue, so the psychological and physical abuse 300 people were subjected to will not be punished for what it was: simple and outstanding torture. The court case has seen most of the victims tell their tale and witnessing are continuing to appear in court (two hearing a week). Hopefully the court case will be concluded within 2008, so as not to risk a statute of limitations for the charges.

Last but not least we have the so-called "Diaz School Trial": on the night of saturday 29th police troops stormed the Diaz School and the indymedia center/GSF offices in the Pascoli school on the opposite side of the road. The Pascoli school saw the destruction of computers, lawyers hard disk and the seizing of video and photo material which included footage of the operation happening in the other school in the meantime. The Diaz school was acting as a dormitory and the police raided the building arresting 93 persons and injuring 63 (10 very severely). Then the police planted two molotov cocktails in the school ground floor so as to justify the raid with "war weaponry" (molotov's are so defined by italian criminal law).
The officiers of the main units participating in the raid, as well as the highest officiers of the Italian Police who were present during the operation and signed the arrest warrant and seizing declaration are being charged with "injuries", "false declaration" and "libel".
The court case saw during 2005-2006 all the 93 victims of the raid witnessing in court, as well as journalists, politicians, and activists who were in the other school during the raid. People living in the neighbourhood came to explain how they lived the operation, medics and paramedics came to explain how severe injuries were, how people working in hospitals felt about the operation, and so on.
Officiers from the Carabinieri special investigation technical unit (RIS) witnessed the absence of evident resistence and stone-throwing from the window of the school (the supposed resistance was key to the police claiming the need for a strong and firm raid), and more investigating police officiers came to explain how they identified various accused police members by their telephone calls and the use of videos.
In the last year there were many outstanding hearing: Pasquale Guaglione, former police officiers leading the charges on the seaside of saturday 21st 2001 afternoon, confirmed to have found the molotov cocktails planted in the Diaz school on the seaside in the afternoon. He then gave them to his commander (General Donnini) and his chief in command (Piccolotti) refused to mention them in his relation on the days activities. Supposedly the molotov cocktail then passed from the General car (which was present on the Diaz school raid scenery) to the school, as a famous television video shows clearly.
The former Genoa Police Chief (Francesco Colucci) during his witness changed all his previous declaration, trying to frame police officers who were not accused in the court case and to easy the situation of accused ones. Unfortunately for him the former vice-chief of the police (Ansoino Andreassi) witnessed the week after and accused Colucci of "having made incorrect declarations". This resulted in Colucci being investigated for false witnessing.
Ansoino Andreassi further cleared once and for all the nature of the operation: "normally when you have serious rioting, police need to make lots of arrest to counterbalance the riots; the Diaz operation was aimed at restoring the Police image after the previous days of rioting with police apparently doing nothing". He also cleared the "institutional" command line: "the chief of the Police sent La Barbera to Genoa saturday afternoon, marking a change in strategy and my defeat; Gratteri was the operative high officiers directly depending from La Barbera".

Lastly two of the police officiers accused in the trial came to witness in court: Vincenzo Canterini and Michelangelo Fournier (respectively chief and vice-chief of the special riot units who led the raid). Canterini stated that he did not see any resistance but supposed there had been seeing and hearing what his men told him. Canterini further said to have come after the entrance of the unit and to have seen some beating but not by men of his unit. He contraddicted lots of his previous declaration.
Fournier on the contrary is known to be the officiers shouting "Stop! Stop!" during the raid when he finally sees a girl lying in a pool of blood on the first floor. He confirmed all his previous declarations and even made them stronged. He confirmed having seen beating and unjustified violence (but not from his men) and said it felt like being in a "mexican butchery". He stated in court that "it was no police operation but a violent and pointless raid".
His declarations have been reported in all major television newsreel and newspapers.

The Diaz court case has now seen the end of prosecutors witness list and will go through the defense list during the coming year. It will probably be concluded by the end of 2008. 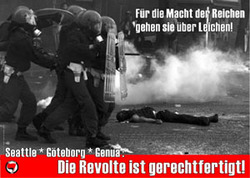